news and economic outlook for the wire and cable industry

During the past three months expectations for steel, natural gas, and oil prices have been adjusted. Despite recent upward movement in the trends for these commodities, prices between now and the first half of 2020 are unlikely to rise above levels seen in the first half of 2019. Industrial activity, as measured by US industrial production, is expected to decline into the first half of 2020. As activity decreases, we will likely see a more price-conscious consumer. Consider renegotiating contracts to try to save on costs as prices generally decline through early 2020.

The outlook for US crude oil futures prices have likewise adjusted downward. Market factors such as the global economic slowdown, which is limiting demand, coupled with growing supply, leads to revised expectations for prices.

US steel scrap producer prices during the three months through August were down 25.3% from the same three months last year. Prices will likely fall a little further through the remainder of this year. Activity in US iron and steel mills production was 0.9% below last year. At the same time, related new orders were down 7.2%, likely a function of both lower prices and less-robust demand.

US natural gas futures prices came in below expectations in September. The outlook for utilities, business-to-business activity, and housing suggests weakened demand for natural gas. The double-digit year-over-year growth in US drilled but uncompleted wells inventory and US natural gas production suggests excess supply will likely contribute to lower prices as well. Given these factors, the outlook for prices revised downward.

Looking for an innovative wire bundling solution? The newly expanded line of Ratchet P-Clamps provides installers and MROs with bundling options designed to adapt to more applications. Working with a mix of wires and cable sizes? Want to route multiple bundles in parallel? Need to navigate around obstructions? Go offset or inline, angled or straight. Ratchet P-Clamp will secure a range of cables without changing any other part of your cable routing and management strategy.

What you need to know: The reaction to the latest retail sales data was interesting, but a more holistic look at retail sales reveals reasons to be encouraged about the US economy in the coming months.

The reality is that retail sales did stumble in September. Total retail sales posted a steeper-than-normal 8.82% decline from August to September, but the September 2019 figure came in 3.8% above the year-ago figure. 2013 posted a steeper August-to-September decline, and the US GDP still accelerated in the second half of 2013 and continued to see a solid rate of growth in 2014. The September data does not present a reason to become gloomy about the future, and it is not a harbinger of recession in retail sales.

A more holistic look at total retail sales reveals reasons to be encouraged about the US economy in the coming months. Retail sales for the entire third quarter came in slightly above the second quarter, posting the only second- to third-quarter rise in the post-Great Recession period. Seasonal rise since March is a very encouraging 11.1%, the steepest since 2005 and steeper than the post-Great Recession average of 8.3%.

The retail sales data is also providing encouraging input about the US economy in 2020. Retail sales during the past 12 months were 3.4% higher than during the previous 12 months. Additional rate-of-change rise will be key to a positive outlook for the US in 2020.

We believe that monthly pronouncements are best taken with a grain of salt. In this case, what is purported to be unsettling or bad news is just a single data point. The larger trends show that retail sales are providing an encouraging, if preliminary, look into 2020. We suggest you plan on economic expansion in the coming year and ignore the doomsayers.

Need a reliable, durable battery cable under the hood of cars, trucks, buses, marine, agricultural, mining, or off-road vehicles? Prestolite Wire’s SAE J1127 SGX cable is the workhorse you're looking for, with excellent heat, abrasion, and fluid resistance in the most extreme conditions.

A deal has not yet been approved for Brexit. What kind of effect is this having on the UK’s economy and trade?

While a Brexit deal is looking more likely, hurdles remain, and we have seen the regional leading indicators react to the uncertainty. The UK Business Confidence Index has dropped significantly in recent months, signaling that companies are uneasy about the future. This trend also indicates that a negative impact to the UK’s industrial economy could persist into early 2020.

The UK will face unique pressures due to Brexit. As long as negotiations continue and the possibility of a no-deal scenario remains, uncertainty will be a factor. Uncertainty typically turns off investors and can negatively impact consumer spending. While we will continue to monitor the situation closely, we have not changed our outlook for the region, as a timeline for Brexit remains undecided.

Copper averaged $2.62 per pound in October 2019, down 5.6% from the same period one year ago. Prices have generally fallen in recent months. Slowing growth in the global industrial economy could keep prices trending downward through the remainder of this year. 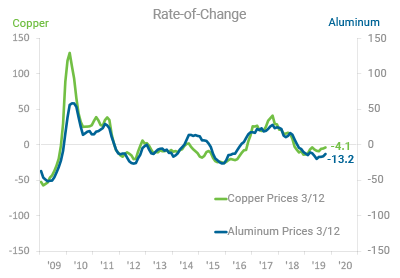 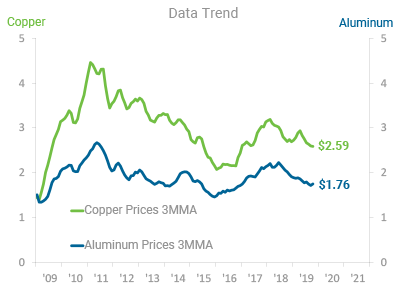